5 Signs of Passive-Aggressive Management: Why It Kills Employee Motivation and How to Deal 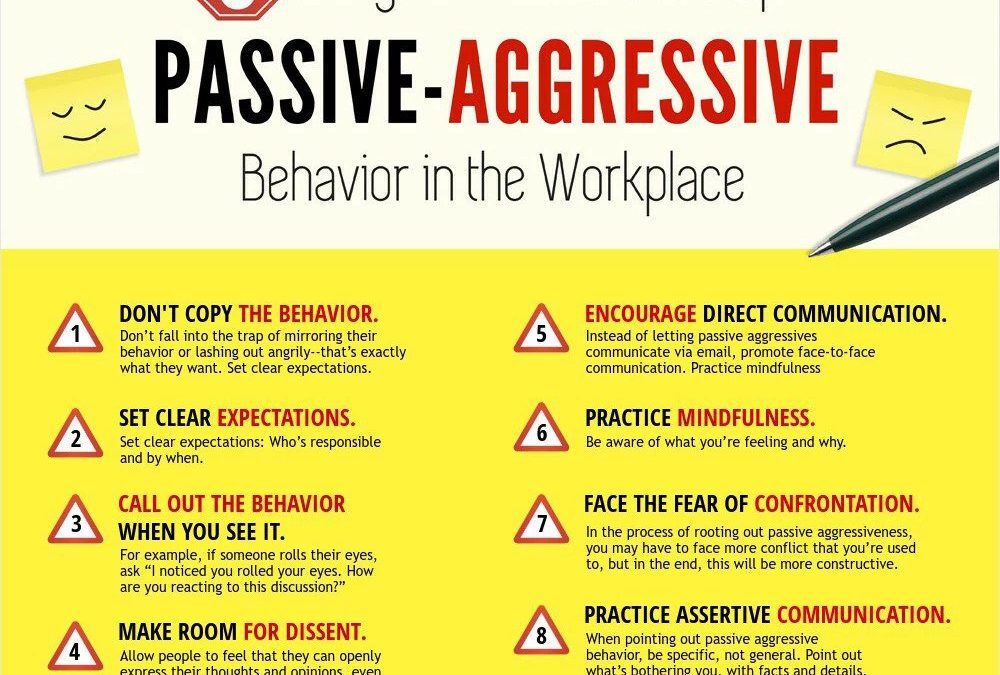 We’ve all had to deal with that passive-aggressive boss at one time or another, and it sure ain’t fun.

We’ve all been there. Somehow, through a loophole in the karmic system of workplace balance and order, your boss has landed a position he or she just doesn’t seem to deserve or know how to handle with confidence, and, unfortunately for you, they know it.

Unfortunately, employees can smell that type in ineptitude all the way from that corner office. Think, The Office; either the original or American version will do.

But how do you know if you really have a passive-aggressive boss? And what’s the best way to deal with it?

If any of the following warning signs ring true, you may have some managerial passive-aggression on your hands, and unless that manager makes some immediate changes, he or she will be on the fast track to losing employee respect and dampening motivation.

Read on for the warnings signs of passive aggressive management and the best way to deal with it in the workplace:

1. There’s no direct critique of work, good or bad

The passive aggressive manager will do his or her best to avoid giving any kind of direct critique of your job performance. Employees often receive little to no feedback, and no praise or promotion for excellent performance or exceptional talent. Basically, with this type of manager, you never know where you stand. Talk about bad for morale.

If your boss never gives critiques, or does so in a way that still leaves you feeling unclear about where you stand, ask directly about your performance. Putting her on the spot with a direct question rather than playing her game might help her give you feedback that’s actually valuable.

Doesn’t work? Put your head down and do the best possible job you can.

2. Rules are vague or unnecessary

When this manager puts rules or directions in place, they give them in the form of passive statements. Rather than complete and explicit dos and do don’t s for employees, this manager gives a vague sets of guidelines, derived from a formula that only she knows. If anyone begins to stray from the picture she has in her head, she becomes upset, possibly invoking new, stricter rules that are even more unnecessary or unclear.

As an employee, this can be a difficult to handle. Unfortunately, at the end of the day, your boss is your boss. He or she gets to make the rules, and it’s your job to follow them. If you want no hassles, simply do what they ask to the best of your ability.

Or, if the rules are totally out of control, try to figure out your boss’ motivation. Maybe it’s not that he really cares about how long your lunch break takes; he actually cares about how it looks to other employees and their superiors. Figure out what line your boss wants you to toe, and do your best to toe it.

3. Pickiness about the wrong things

This is a surefire sign of mismanagement if there ever was one. If you have a boss who never comments on the more important issues, such as how your work contributes to the overall goals of your company or how your production quality looks compared to some of the best employees, and instead constantly finds tiny details to pick at, he could very well be insecure about his position. Such a strong focus on things that matter least is confusing for employees and leaves you second-guessing your work and your value.

If this happens once in awhile, just let it go. But if it’s a constant issue, the next time your boss picks at something small, try this approach: Acknowledge the complaint fairly, then ask how to best tailor the current project to ultimate goals. Or ask for formal documentation of the errors you’re making, so you can keep track and improve. No matter what you do, tread lightly.

4. Absence of professional development and sharing of expertise

A great leader wants to help everyone improve. An insecure leader secretly fears losing her position to someone else and avoids sharing what she knows at all costs. Passive-aggressive managers are not comfortable enough with their expertise to share their experience with their employees, which means little training for new employees and no professional development or collaboration for employees already working in the company.

This can be a pretty depressing environment to be a part of, if you like to learn or have career goals. (And don’t we all?) The best way to deal is to sidestep your boss altogether. There are plenty of ways to learn from those around you. Your co-workers probably have ranges of knowledge that you don’t, and vice versa. If your boss is holding you back from expanding your career (maybe without even knowing it), it’s time to start looking elsewhere for professional development, and, ultimately, figure out how to leave both your boss and position behind.

A great manager knows how to dance the fine line between maintaining a position of authority while still having genuine interactions with employees. The passive aggressive manager, on the other hand, cannot let down his guard. Although she wishes strongly to be liked by employees, often playing the role of the joker or comedian, she feels she must place a wall between herself and subordinates to avoid genuine interaction. This manager builds up the wrong types of distances between himself and co-workers. She seems friendly and open one moment, then retreats the next.

Keep your distance as much as possible. It’s obvious your boss wants to draw a line between himself and his employees. Simply focus on the positive aspects of your work environment, without putting much stake in how your boss acts from one moment to the next, and focus on relationships with your coworkers instead.